“No matter how much cats fight, there always seems to be plenty of kittens.” – Abraham Lincoln

Did you know up in the tropics cats can be ‘on heat’ all year around and from four month of age.

One female kitty has the ability to produce an average of about 12 kittens each year. Theoretically, this could result in up to 180 kittens in her lifetime.

A sexually mature kitten can have kittens herself, as early as her first heat cycle. Pregnancy in cats lasts approximately 65 days.  After giving birth a nursing mom can immediately go into heat, even while nursing, and become pregnant again.

As for male cats, they can impregnate countless numbers of females in heat.

Health
–  Reduced risk of getting cancer or other diseases of the reproductive organs
– Reduced risk of acute uterine infections and breast cancer in females
– Females can suffer from physical and nutritional exhaustion if continually breeding.
– Pets generally live longer and healthier lives.

Behavioural
– Pets are less prone to wander, fight, and are less likely to get lost or injured
– Reduces territorial behaviour such as spraying indoors.
– In females it prevents mating behaviour and false pregnancy.

Cost
– No need to find homes for unwanted kittens or puppies.
– Potential cost savings for expensive surgeries from car accidents or fights, which are less likely to occur if your pet doesn’t roam around.

What is the best age to have my animal desexed?

Cats can be desexed with 3 -4 month of age or one kilogram weight.

Cats can come on heat as young as 4 months of age so best not to delay it much longer to minimise “accidents”.

It’s never too late to desex. In fact, the risk of certain diseases increases with age, so desexing is even more important for older animals.

Desexing costs are a guide only. Please note if your pets is obese, pregnant, on heat, have retained testicles or other health conditions then it would be best to speak to your vet to get an accurate costing.

As part of an animal welfare grant our organization Ark Aid Inc is offering free cat desexing for concession card holder until end of May 2019. There are 70 spaces, so get in early!
All surgeries will be done professionally at The Ark Animal Hospital in Yarrawonga. To apply fill in this form or contact us 08 8932 9738.

In the last two years our charity was successful in receiving grant money to offer free cat desexing for concession card holders.

Most popular suburbs were: 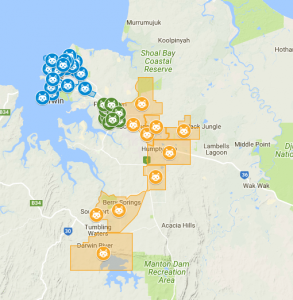 All content is copyright © 2022 Ark Aid Inc. or used by permission.

Site by MCutter.com — Back to Top ↑